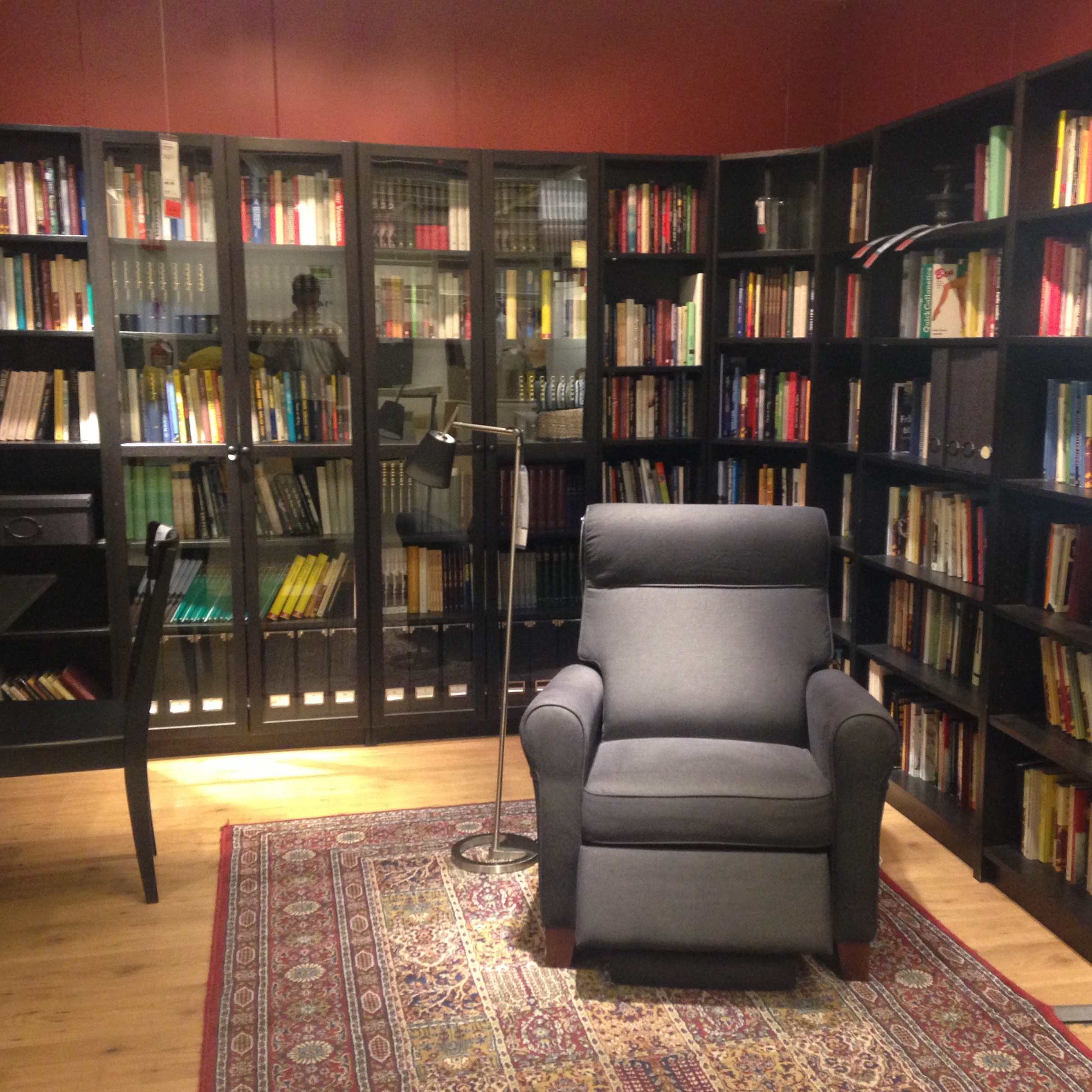 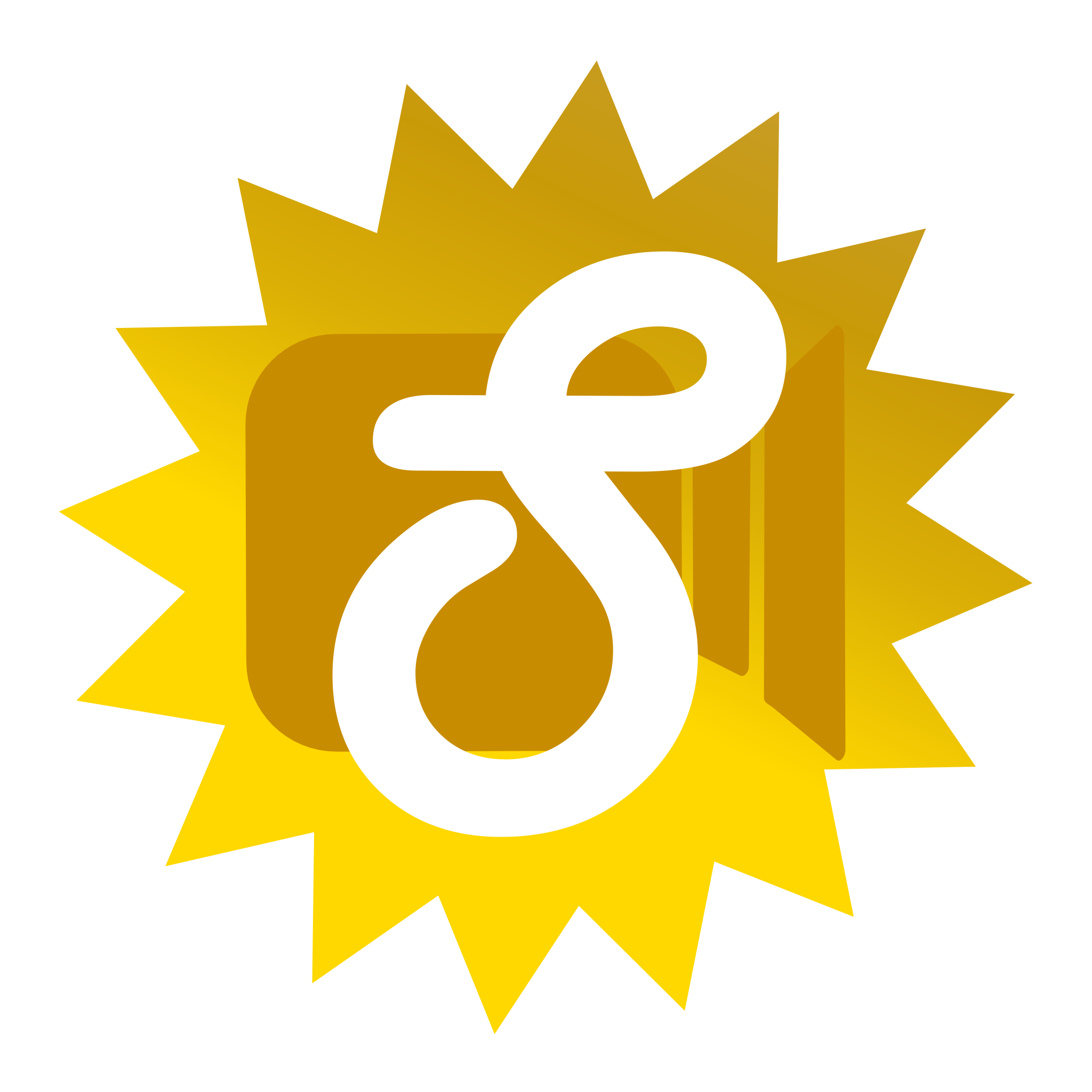 Skive it, Inc. is developing breakthrough autonomous Artificial Intelligence (AI) systems that can feel using semi-unsupervised Deep Learning. Our technology extracts contextual feelings / sentiments - like style and mood - from real-time video feeds using proprietary Deep Learning algorithms, generating data that is then searchable with Natural Language Processing (NLP). We believe the technology that we're building will be the 'heart' of every robot of the future.

Making it your cup of tea.

The Skive it® team is heavily focused on optimizing the proprietary Deep Learning algorithms powering our core AI systems. To support this work, we have launched several consumer-facing systems designed to generate large volumes of AI training content and give consumers a taste of what Skive it® technology is capable of - including:

The first system that we have come up with — and is live — is a search engine that enables you to search for an experience based on style and mood. Skive it® Search is reinventing how you select places and experience. It acts as your real-time style and mood tracker for places. With Skive it® Search, you can select places based on their style and mood instead of just food and drinks. We are the only one who can figure out the style and mood of an experience in near real-time using an autonomous neural network based AI system (Deep Learning). You can use this system to find that super romantic café for a date, or a cozy café to work from; or figure out how is ambiance inside a club at 10pm in San Francisco. 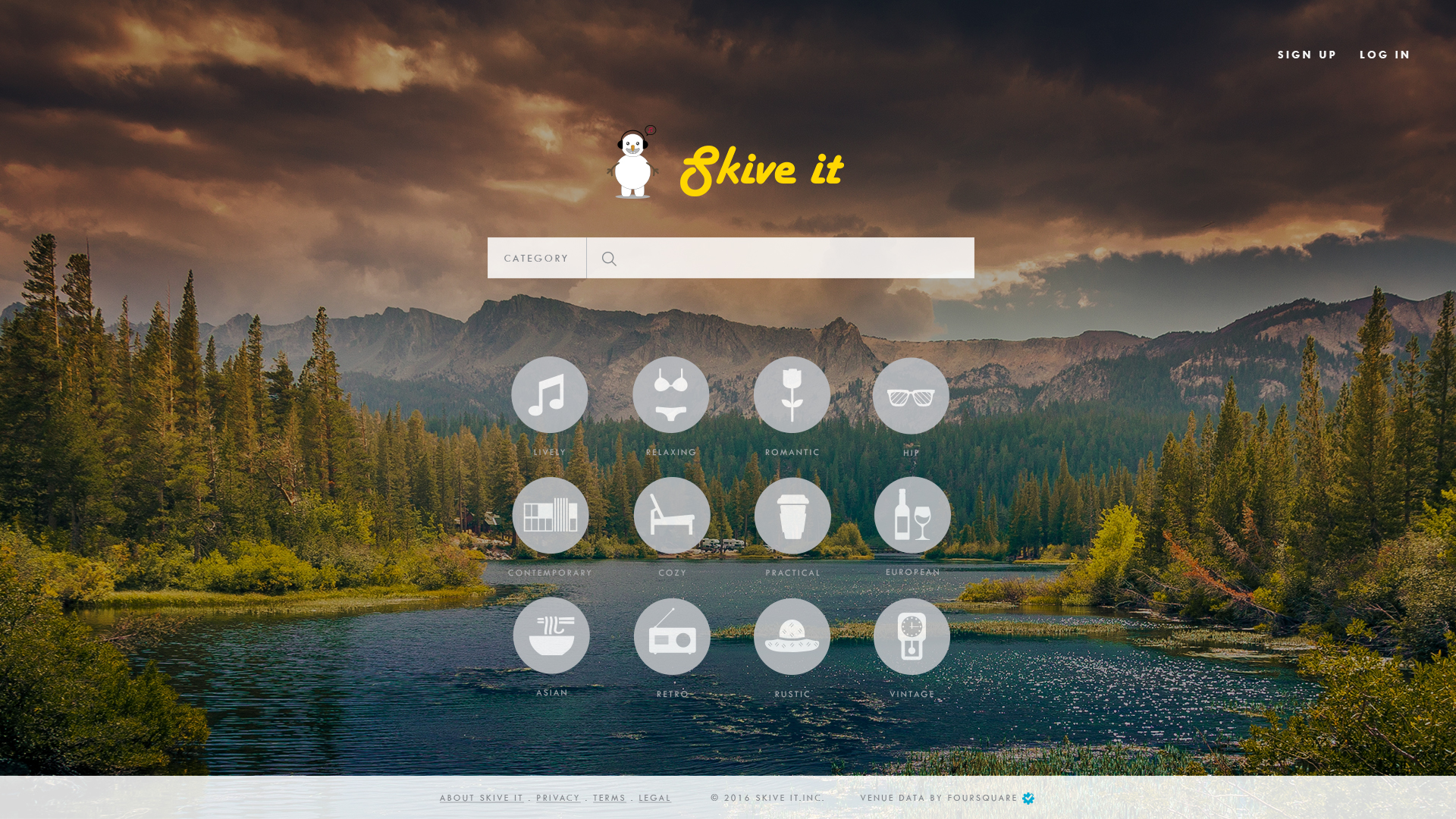 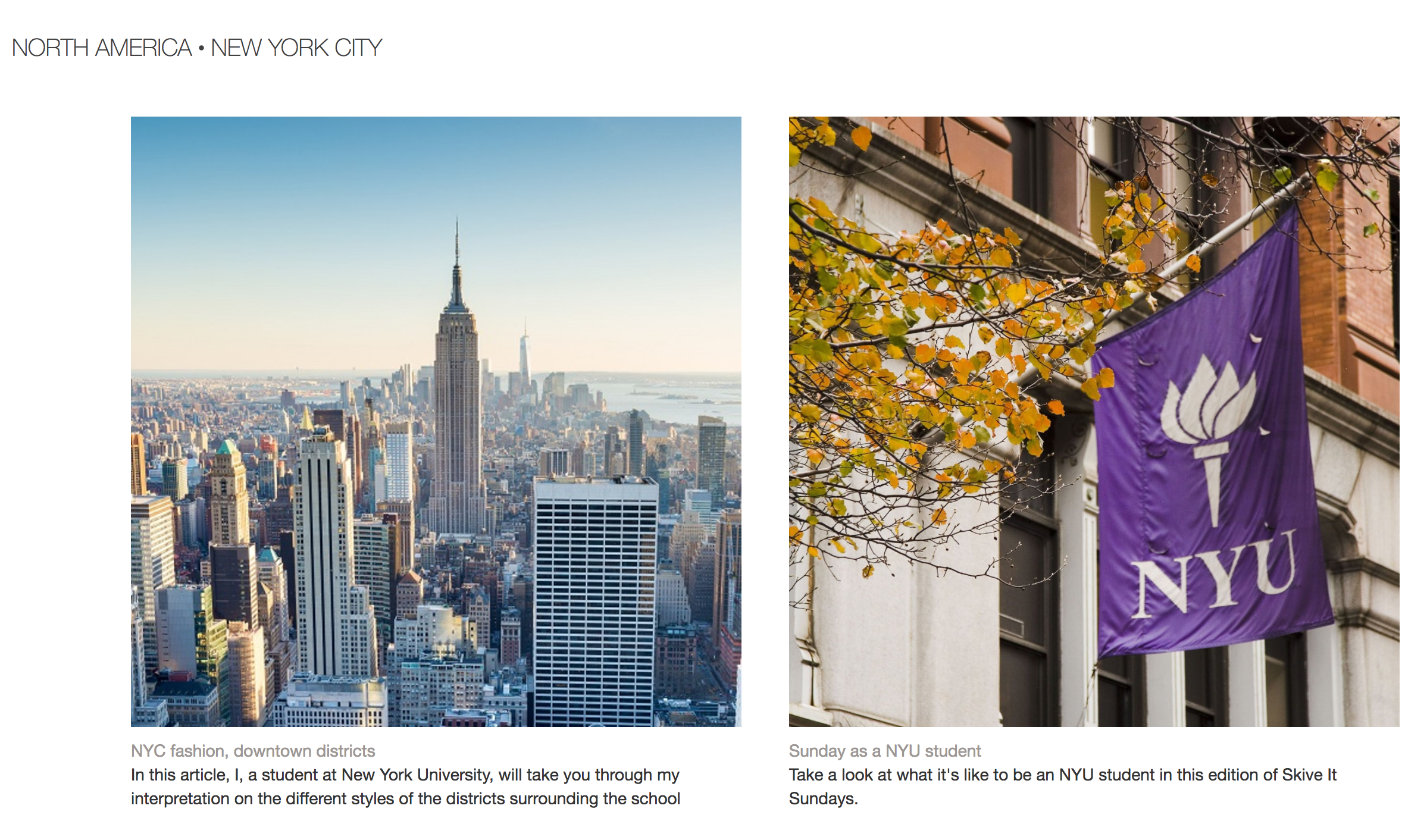 Are you new to San Francisco, Palo Alto, Los Angeles, New York City, Seoul, Hong Kong or Guangzhou and want to get the insider view of the top happening places and experiences? You are in for a real treat. Skive it® Scanner provides top experiences in a city, curated by Skive it® experts. Fasten your seat belts as we teleport you via Skive it® Scanner.

Skive it® Video App is the closest thing to a teleportation device on the market today. It is your travel guide, both inside the city and outside. Skive it® helps you search for, discover places and experiences based on their style and mood. We offer a platform to share near real-time videos of interactive experiences – videos are tagged with the style (hip, cozy, retro, practical, etc.), mood (lively, romantic, and relaxing), time and location. This allows you, for example, to "walk through" a hotel, experiencing its vibe first-hand before you book. You can search for experiences with just the right style and mood to find that super romantic café for your date. Or find that hip date! Look for it in the app store soon! 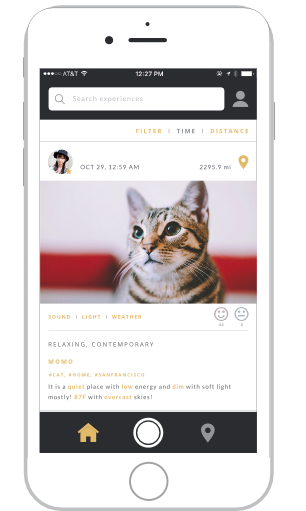 While Softbank, Baidu, Google, IBM, Tesla, Uber, and many other large technology companies are racing to build AI systems that *coldly* automate many of the tasks performed by humans today, Skive it, Inc. has a different mission. We are building AI systems that can truly feel and that will enable future robots to better understand and interact with humans. We believe that robots capable of understanding human feelings / emotions will make the world a better place for everyone, and we're working hard every day to make that a reality.

One particular group of people with much to gain from robots with 'hearts' is the aging population - this is our starting point. In many countries such as the US, Japan, and South Korea, life expectancy is increasing and the aging population is increasing while the younger population is shrinking. 25.9% of the Japanese population in 2016 was aged 65 or above (Source: Statistics Japan). In South Korea, 13.2% of the population in 2016 was aged 65 or above. This number will reach 24.5% by 2030, and 41% by 2060. (Source: Statistics Korea). Simple robot companions are no longer a novelty in Japan due to the criticality of the aging population, and many different products currently seek to address the growing demand, most notably the Kirobo Mini baby companion from Toyota Motor and Pepper from Softbank Robotics. We believe these products are a good step forward, but lack the most essential aspect for meaningful human interaction with a robot companion - FEELINGS. The Skive it® team has built technology to bridge that gap and is committed to making robots that can feel the new standard in the marketplace. 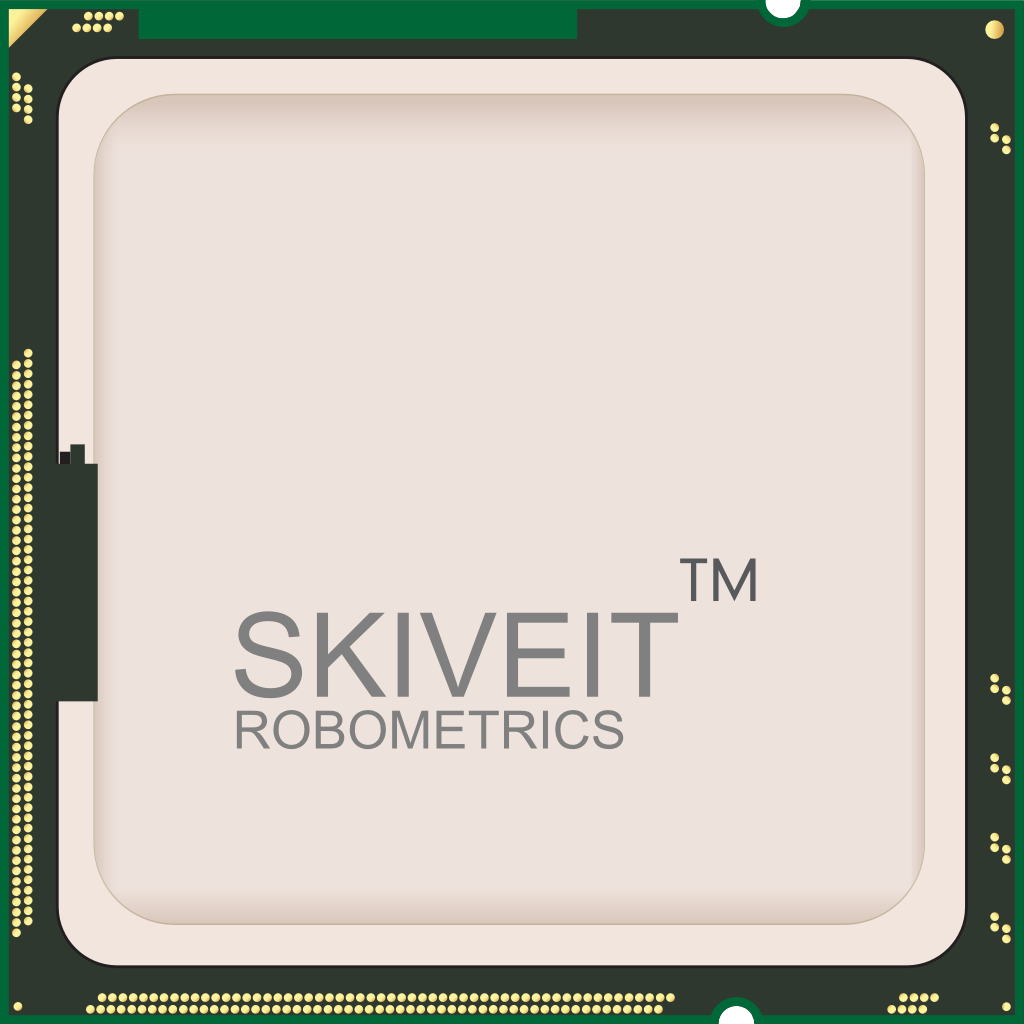 Skive it, Inc. is developing a revolutionary chip that we believe we will be the ‘heart’ of every robot in the future. Our chip uses proprietary Deep Learning technologies to enable robotic systems to truly feel, and therefore, to act more human. It does this in real-time by extracting contextual feelings / sentiments from video input, and then interpreting the style, mood, and feeling of the experience - using proprietary semantics for translating human understanding to robot feelings. As a result, robotic systems are capable of thinking along the lines of Why is this happening? and How should I feel about it?, instead of simply What is happening?.

Skive it, Inc.'s Robometrics™ takes the functionality of our chip to an entirely new level. With Robometrics™, a revolutionary new framework is added that continually measures and monitors the ‘human-ness’ of robotic systems using the Skive it® chip.

The Skive it® team is making progress at a rapid pace. Check back for updates on our products soon!

Come Skive it® with us!

We are looking for strategic hardware or software partners who can co-invest in Skive it, Inc. If you are interested, please check out our Investor Page and contact us at robopartnerships@skive.it

We are looking for businesses who are interested in partnering with Skive it, Inc. to promote their venues and locations on our web and mobile platforms. If you are interested, please check out our Partner Page and contact us at partner@skive.it

We are looking for bright, motivated candidates to join the Skive it, Inc. team! Current open positions include: Mobile UI Designer, Software Engineering Intern, AR/VR Engineering Intern, and Marketing Intern. If you are interested, please check out our postings on AngelList for more information or contact us at jobs@skive.it